The Mid City Yacht Club is a neighborhood bar built in a building that was established as Savaggio’s Grocery store in the mid-1930’s. Savaggio’s Grocery had a bar built in the back of the grocery store from the day it was opened. The grocery store was converted to only a bar in the late 1950’s or early 1960’s. It has been a number of differently named drinking establishments, catering to the softball park across the street, St. Patrick Park. The most recent establishment was Extra Innings, which went underwater by a couple of feet when Hurricane Katrina struck New Orleans on August 29, 2005.

It just so happened that a friend of the bar owners, Mark Melan, was cruising the neighborhood in a pirogue picking up people from their houses in the days following the storm. As he was riding by the bar in his boat, he jested that “they should name that place the Mid City Yacht Club.”

And so its recent history began. Mark’s friend Ben Markey and his wife Stefanie purchased the bar in late 2006, with the establishment shuttered and flooded, unopened. Ben and his friends gutted the bar to the studs and he invited his friends MJ and Jeremy Sauer to be partners and help him manage the renovation.

The renovation occurred from November of 2006 through June of 2007. The renovation used as much reclaimed Katrina wood as possible, including wood from MJ and Jeremy’s flooded home. On the ceiling and the bar top, was reused floorboards from MJ and Jeremy’s house and in other places they used their baseboards and gutter molding. The wainscoting for the bar was made out of the discarded doors of McMahon funeral home which were solid cypress doors. Lots of great old character was discarded in trash heaps after the storm, and the Mid City Yacht Club’s carpenters found as many ways as they could to work it into the finish work rather than see it go to the landfills. 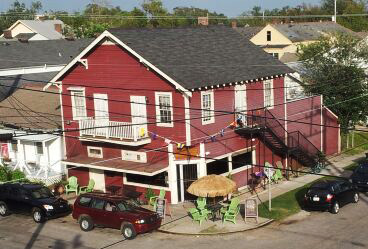 The Mid City Yacht Club opened on June 21, 2007 and has been open 365 days a year (with brief exceptions for Hurricane Gustav and others).

Bring the Yacht Club to you! Check out Waitr and get food delivered to you.

Check out our catering menu for your next event.
Get our Catering Menu here.